It’s almost a week after Awakening has been released…

I LOVE to write. I’ve been writing since I was in elementary school. I have stories that I’d started when I was 6-7…up until 2 years ago. Stories that I’d never completed..whether that was because of the squirrel that grabbed my attention or the fear of failing, regardless, they never got finished.

More recently, I focused on short stories, poems, erotica..but I want to go all the way. I see myself being a VERY successful author with a very successful publishing company. I’m willing to put the time in and invest in what I believe in. I have been saying for years that I wanted to publish a book.

I finally did it.

I pushed past my own doubts and fears, and published my first novel…and during this crazy year, too.

With cancer slowing me down.

With joe blogger saying first-time authors shouldn’t set their goals of being the next James Patterson. Because, come on–get real, that’s not possible.

With society telling me that I need to focus on a 9-5 and as long as $$ is coming in, who cares if you’re happy?

I couldn’t be more proud.

Releasing Awakening is important to me for many reasons. Not only did I get out of my own way, but it reminded me that I am a very capable person.

I’ve spent a good chunk of my life feeling incompetent in pretty much everything. I was my worse critic. Nothing was ever good enough..to me. I was a failure.

I got an A on this assignment, but I should have gotten an A+.

I graduated from high school, but I should have made exceptional honor roll the whole time.

I have a degree, but I have no idea what I’m going to do.

I became a lieutenant in the Army, but never made it to captain.

I gave birth to a beautiful baby girl, but I’m a single mom, living with her parents.

I beat my cancer, but…

I think you get the point.

Never did I ever stop and say, “damn, Tiera! You accomplished x,y,z–that’s fantastic! Good job!” Because, ya know, I could have done better.

My battle with cancer really opened my eyes to just how meaningful every accomplishment and every moment in life is. Of course there is room to grow–if I’m not growing, I’m not learning. But I’m allowed to congratulate myself. I deserve to be proud because I did some fuckin awesome things in my short 27 years of life. Go me!

Between becoming a mom and dealing with cancer, I’m finally becoming the woman I’ve strived to be: one who achieves the goals she sets–and recognizes and awards herself for it. I’m becoming a woman who is happy with who she is, who can express herself freely because she knows who she is. Confident. Beautiful. Intelligent…

Finally, I can say that I love myself and that is the most amazing feeling I’ve ever felt.

So thank you, Tiera, for kicking ass and taking names! You go girl! 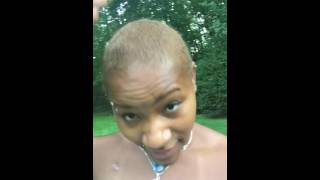 Who's Ready for an Awakening?